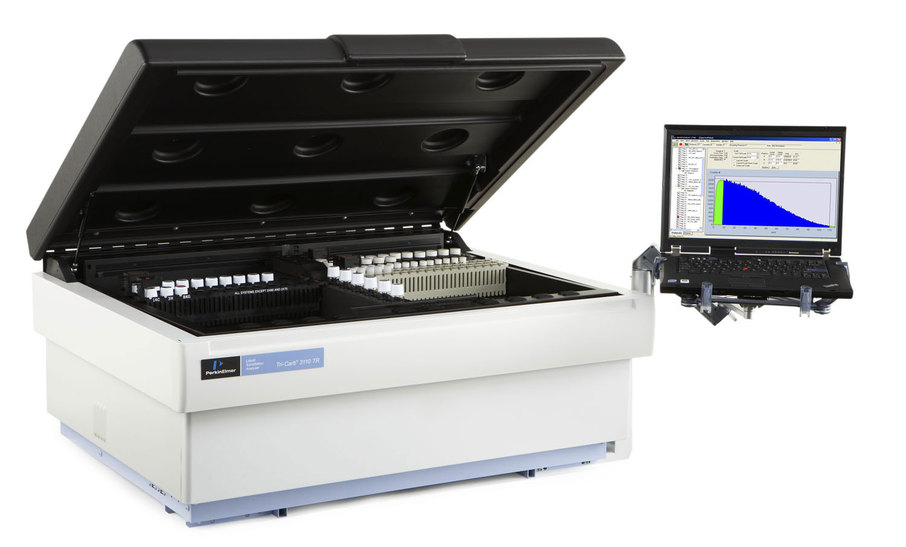 PerkinElmer Tri-Carb 3180TR/SL is a super low level liquid scintillation analyzer. It is used in research and environmental monitoring applications for detection of little amounts of alpha, beta and gamma radioactivity.

By placing a vial containing a radionuclide and scintillation cocktail into a dark detection enclosure (the instrument’s detector), the scintillation counter can measure photon intensity. A photosensitive device amplifies the light emitted from the sample vials and the amplified signal is converted to pulses of electrical energy and registered as counts. The counts accumulated during this process are sorted into separate channels, with the amplitude of the signal determining the energy channel (keV) into which the counts are sorted. The counts that are collected and sorted are used to generate the sample spectrum. Using this spectrum, the system can perform various count correction calculations and determine Counts Per Minute (CPM) for each sample. To calculate Disintegrations Per Minute (DPM), the instrument will determine the counting efficiency of each sample. Using a quench curve, the instrument compares the quench index for the samples to the quench index for the quench standards to determine sample counting efficiency and subsequently calculate DPM for the unknown samples.